Cypress trees in Lake Drummond, viewed from the end of the Washington Ditch Trail

Last week, as research for my next novel, I traveled to the east coast to visit the Great Dismal Swamp.

The swamp, which straddles the border between Virginia and North Carolina, was home to a maroon society that persisted from the early 1700s until the end of the Civil War. Though the majority of the maroons were escaped black slaves, their number also included poor whites fleeing indenture and other legal trouble, as well as Native Americans displaced from the surrounding country. During the Revolutionary War, the maroons sided with the British against the slave-holding Americans; in the Civil War, they fought with the Union. Even when not actively at war, the maroons were a constant thorn in the side of the local planters—raiding plantations, encouraging slave revolts, and offering asylum to any fugitive who could make it into the deep swamp without dying.

The planters fought back by messing with the ecosystem. In 1763, a Virginia militiaman named George Washington founded the Adventurers for Draining the Dismal Swamp, which dug the first of many canals intended to lower the water table and allow harvesting of the swamp’s timber. Although the ultimate goal of converting the Great Dismal into farmland was not achieved (turns out it’s a lot harder to drain a swamp than you might think), the present-day Great Dismal is smaller and drier than it once was, and a network of old logging trails maintained by the U.S. Fish and Wildlife Service provides relatively easy access to hikers and bicyclists.

I flew into Norfolk on Sunday night. The cabbie who picked me up at the airport spiced up the ride with a graphic description of what happens if you get bitten by a copperhead (one of three species of venomous snake native to the swamp): “Whatever part of you gets bit swells up real big, and if you don’t get to the hospital that same day, you’re losing it.” Cool!

My hotel was in Suffolk, a town created by God to test the faith of people with peanut allergies. Mr. Peanut is a local mascot, Birdsong Peanuts has a processing plant just off the main drag, and even the Railroad Museum has a room dedicated to the peanut industry. The fields surrounding the town are currently filled with bright yellow crops that I thought might be peanuts as well, which led to some fun speculation about whether the above-ground part of the plant carries the same allergens as the buried nuts, but these crops turned out to be soybeans, so I didn’t get to put it to the test.

At the hotel I met up with my old college buddy Jeff Schwaner, who lives a few hours away in Staunton. After an early breakfast the next morning, we got in Jeff’s car and drove down to check out the Lake Drummond Wildlife Drive. This was my introduction to the deceptive nature of distance in the swamp. The drive is only six miles long, which on paper looks trivial, but the condition of the road is such that, even if you don’t constantly stop to gawk at stuff, it takes a long time to get to the end.

And there’s a lot to gawk at. After passing through a dense pine forest, you come to a more open cypress marsh, and eventually reach the Lateral West Fire Scar, where huge fires in 2008 and 2011 burned away the trees and several feet of peat soil.

The Scar is home to a fantastic number of swallows and other bug-eating birds. Along the Drive we also saw two species of vulture (turkey and black), a red-shouldered hawk, a raccoon who didn’t want his picture taken, lots of turtles, and what is possibly the world’s dumbest heron: Startled by the approach of the car, the heron flew a short distance along the roadside ditch and then stopped, only to get spooked again when we caught up with him. We ended up chasing the poor guy the better part of a mile before he figured out he could just leave the road to get away from us.

At the end of the Drive is Lake Drummond, a freshwater lake formed several thousand years ago by (a) a gigantic peat fire, (b) a meteor strike, or (c) shifting tectonic plates—my vote would be for (b), but hey, I like drama. It was a very windy day, and as you can see in the video below, the lake surf is brown. That’s because the lake is basically a big bowl of peat tea; the high acid levels supposedly kill most microorganisms, rendering the water safe to drink without boiling or filtering (though it does leave a bitter aftertaste).

Around noon, Jeff dropped me back at the hotel and we said our goodbyes. I spent the rest of the day wandering around Suffolk and then hit Kroger’s to buy dinner and supplies for the next day’s hike.

Tuesday I left the hotel around 7:30 and walked the two miles and change to the Jericho Lane trailhead. On the way in I passed a guy in a Fish and Wildlife Service car, and after that I didn’t see another human being for nearly eight hours.

The Hudnell Ditch Trail, early AM

Posted signs warn you not to leave the trails. In a lot of areas, that isn’t even an option, because the undergrowth is so dense. The quality of the trails varies. Fish and Wildlife has earth-moving equipment stationed at various points around the trail network that it uses to keep the plants at bay. Trails that have been recently cleared (like the Williamson Ditch Trail when I was there) are a muddy mess of tread tracks, while trails that haven’t been tended in a while are covered with new growth that will clean the mud off your shoes before tripping you up. There are also unmarked obstacles: at the Hudnell/New Ditch Trail junction when I went to turn north, an ongoing repair to the canal system had left a moat in my path that I had to Indiana Jones my way across.

Very quickly I realized I’d been lucky to come in November, rather than August as I’d originally planned. Even this late in the year, temperatures rise quickly from the low 40s at sunup to the 70s by noon, with high humidity. I was fine as long as I took advantage of the shade and drank plenty of water, but I wouldn’t have gotten nearly as far if it had been even ten degrees hotter.

As it was, I made it all the way to the end of the East Ditch Trail. My goal for the day had been to reach the CSX railroad tracks that run along the side of U.S. 13, which according to my map was at least theoretically possible. I did make it to the Norfolk Southern Railway tracks, which run about a mile and a half farther south, but beyond them the trail got very rough, and it dead ended at a mass of reeds about a quarter mile shy of the highway. 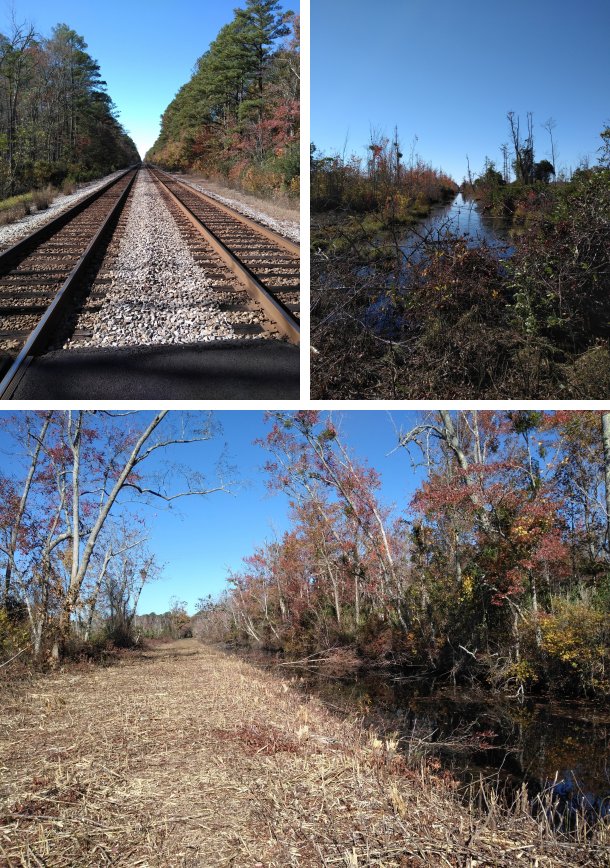 My Tuesday animal sightings were limited to birds, butterflies, and a distant shadow that might have been a deer. I saw plenty of deer and raccoon tracks, though, as well as some fur-laden scat that had probably come from a coyote.

I left the swamp and got back to the hotel a little after four, having walked about 25 miles. I called my wife, Lisa, and found out that my Fitbit had been firing off a steady stream of congratulatory emails throughout the day, which was comforting to her, since each new progress badge meant that I hadn’t (yet) been eaten by a bear.

The following morning—my last day in the swamp—I took an Uber to the Washington Ditch Trail Head. As you’d guess from the name, this trail follows the canal that Washington’s Adventurers dug back in the 1760s, and it ended up being my favorite trekking spot.

Near the beginning of the trail I met a retired woman who said she comes out to the swamp almost every day to take pictures. The area where we were standing had a lot of wrecked trees, and at first I assumed it was another fire scar, but she said this was actually caused by a tornado: 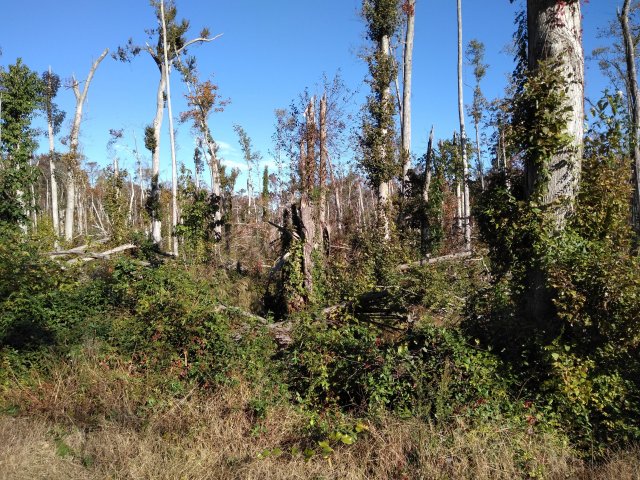 We chatted a while and then I continued down the trail. It was a couple miles farther on that I heard a big splash and saw otters swimming in the canal beside me. Like every other animal I encountered in the swamp, they were shy, but I managed to get some video before they disappeared:

Seeing these guys was the high point of my trip. After they took off, I had lunch at the Lake Drummond overlook at the end of the trail (the lake was totally calm, very different from Monday) and then doubled back to the Lynn Ditch Trail to begin the long walk north to my exit point. 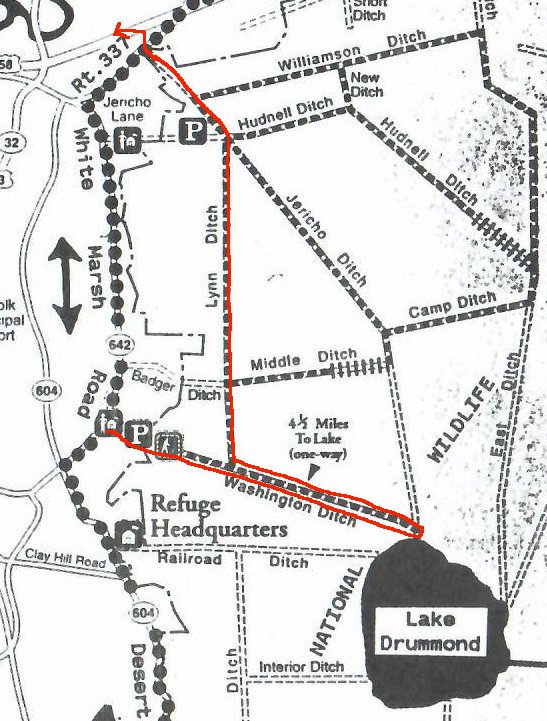 I was pretty hot and tired, but the memory of the otters kept me going. And then a little while later I had my second exciting animal encounter of the day. I saw a shadowy figure of some kind up ahead, and picked up the pace, hoping to get close enough to identify it before it disappeared. I’d just pegged it as a deer when it turned around and stood there motionless, looking right at me and doing its best Michael Myers impression: 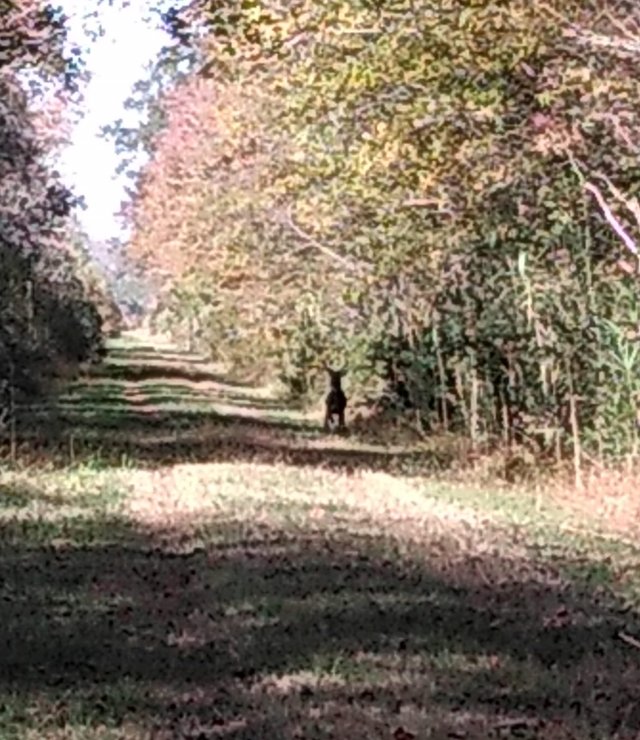 It held this pose long enough that I began to wonder whether I would become one of the 120 Americans killed annually by deer (which would be, I admit, hilarious). But finally it turned tail and ran off.

By 3 PM I’d reached the Jericho Lane exit, but rather than go out that way, I continued northwest to an exit marked on my map as “Lamb Avenue.” I couldn’t be sure this route wouldn’t dead end the way the East Ditch Trail had, but I decided to chance it, and despite a couple tricky spots, I did make it out.

For my last adventure of the day, I asked the Google map app on my phone to find me the quickest route back to the hotel. Despite my specifying a walking route, Google proceed to direct me down a busy highway with no sidewalks. By the time I realized this, I was too tired to backtrack again, so I just limped along the breakdown lane and hoped the cops wouldn’t mind. Thanks, Google!

On Thursday morning I took a last walk around Suffolk, and then it was time to head for the airport. I got home without incident and spent last weekend recovering from jet lag and various hiking-related aches and pains.

It was a great trip. In terms of my research, I got what I needed, and I had a lot of fun besides. (Otters!) I’d definitely recommend a visit if you’re in the area.

In addition to the hiking trails, there are boat ramps at the end of the Lake Drummond Wildlife Drive and along the Dismal Swamp Canal that allow you to explore the swamp by water. Both fishing and hunting (in season) are allowed with permits. And if you’d like to spend the night in the swamp, the Army Core of Engineers maintains a free public campsite, accessible only by boat. Just remember to watch out for copperheads.

This entry was posted in Uncategorized and tagged otters, personal anecdotes, travel. Bookmark the permalink.

2 Responses to My Great Dismal adventure